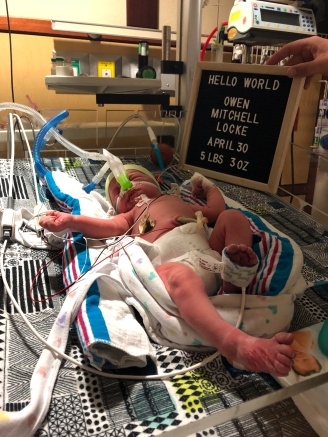 It has been a crazy four weeks! I have been meaning to write about the boys birth story, but Mitchell & I have been soaking up all of the sweet baby snuggles & I have been a tad on the lazy side. 😉 Aside from being busy/lazy/tired, I have been extremely emotional about that day & the experience we had when the boys were born.

April 30th was the scariest & best day of my life. We had our c-section scheduled for noon that Monday & I was so pumped. I don’t think Mitchell & I slept a wink. We were both up by 4:30 & didn’t have to be at the hospital until 9. lol  We took our time getting ready & headed that way. Once we got to the hospital, time started speeding up. They put monitors on me to check on the babies & family came in & out to say hi. Before I knew it, Dr. Carrasco came in & told us it was time to go. We were a little ahead of schedule, but we were ready to meet our boys!

Mitchell & I walked to the operating room & the nerves hit me like a brick wall! Once we were there, the nurses & anesthesiologist began giving me my spinal (which took awhile…) & Dr. Carrasco got started. It took longer than I expected to get the babies out. The entire time I kept looking at Mitchell asking if everything was okay. He kept smiling at me & nodding his head. He rubbed my forehead & held my hand the entire time they were getting the babies out. Once they told me that Baby A (Owen) was coming, I felt a ton of pressure & I swear I felt like they were smooshing me in half. But once I heard his gargling cry, my heart got so happy, nothing else mattered. I asked Mitchell if everything was okay & he assured me that it was. Little did I know that at that moment they were doing chest compression’s on my little boy, he was blue & they needed to get him to the NICU asap. I didn’t have time to think about anything else as they were starting to get Baby B (Eli) out. The pressure started all over again & felt like a lifetime before I heard his little cry.  Mitchell left my side to go be with the boys as the nurse came over to tell me that both of my babies had to go to NICU due to oxygen levels & size. Mitchell asked to stay with me during this time, but ended up having to go with them to NICU. At this point, we didn’t know how Owen was doing. They didn’t even let me see his face before taking him away to NICU. Eli got to come over to my side & I got to kiss his little cheek before he left to join his brother. I had so many emotions going on inside of me at this moment & I don’t think that my brain fully processed what was going on until I was all alone in recovery. 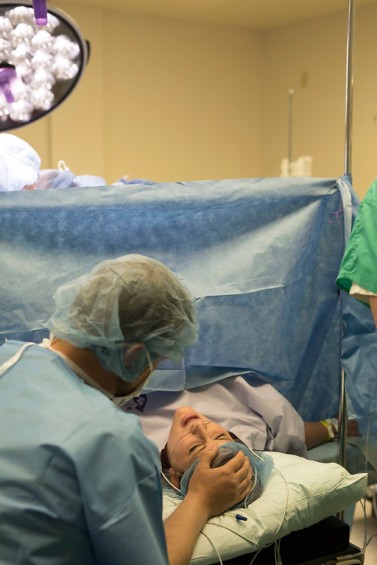 My boys were in the NICU. They were having trouble breathing & I couldn’t be there to comfort them. I was alone in recovery still processing what had just happened. They thought I would only have to be in recovery for about 1.5 hours, but my blood pressure kept getting higher & higher. They tried a few different medications & finally after 2.5 hours, I was able to go to my room. I was an emotional basket case. I have never felt so empty in my entire life. I couldn’t go see my boys until I could stand on my own (4-6 hours after c-section). It was miserable.

After around 4.5 hours, I was wheeled down to the NICU to meet my babies. They were across the room from eachother & hooked up to all sorts of machines. They had IV’s, feeding tubes, monitors, & cords everywhere. Eli had already gotten off oxygen, but Owen still had to be hooked up to oxygen due to his O2 levels being low. They couldn’t be held or stimulated in any way. It broke my heart seeing them in there. It didn’t feel real & my mind didn’t click that these were my babies. It was the weirdest feeling.
We went back to our room & were visited by family & friends. All I could do was cry & pray.  Pray that it wasn’t as bad as I pictured it in my mind. Pray that we wouldn’t have to be in the NICU for that long. Pray that the doctors & nurses would make my babies healthy as soon as possible. I prayed for strength. I prayed that I would still have that initial bond with my boys even though I hadn’t held them yet.

Later on that evening we were able to go in & hold Eli. It was nerve racking at first with him being hooked up to all the monitors, but once that baby was in my arms, I felt a million times better. Owen was still on oxygen, so all we could do was look at him & gently put our hands on him. 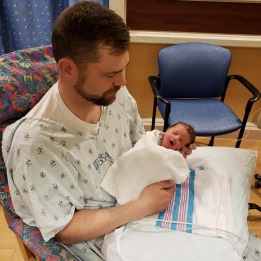 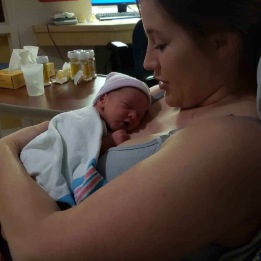 The nurses in the NICU explained that they would start early on trying to wean Owen off of oxygen. They wanted to keep pushing them to feed & breathe on their own as much as possible. They had high expectations for my boys!

Now the thing about having babies in the NICU is that the nurses will never give you an exact date or guesstimate on how long your babies will have to stay. We had no idea. They tell you to expect your due date which for us was 25 days. Mitchell & I were prepared for that. We got in contact with Ronald McDonald house & made arrangements of how we would make this work once I got released. My blood pressure was still a tad high, so I wouldn’t get released for 5 days post surgery.

24 hours had passed & we finally got to hold our sweet Owen. He was off oxygen & now just needed help with feeding & extra monitoring. We spent out days walking to the NICU every 3 hours to feed the boys, then waiting in our room until the next feeding while they slept. We got into a nice little routine. With each feeding the boys were getting stronger & we were learning tips & tricks from the NICU nurses. The nurses we came into contact with at BSA, whether for me or for the boys, were some of the best people I have ever known. We were so blessed & we joke now about how the NICU was the best parenting class we could have ever attended. 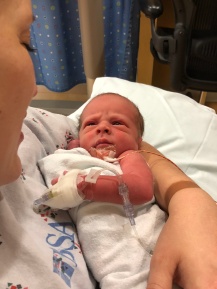 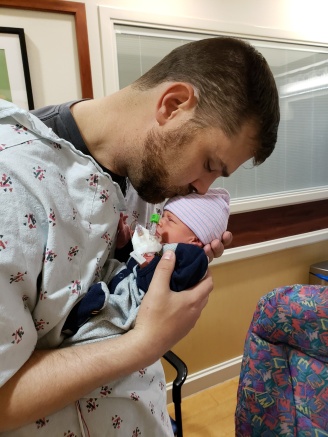 On the 5th day the NICU nurse told us that she was impressed with the progress that the boys had made. They were eating, off IV’s, breathing, & hadn’t had an “event” (monitors going off) the entire time they had been in there. Prayers were being answered & we were told that we could go ahead & do our Room-In that evening (May 4th) & potentially be released the next day. WHAT!!! They had made that much progress. The were strong & improving day by day. 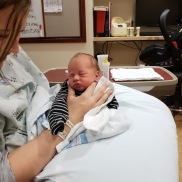 I. Was. Terrified. Thrilled & ecstatic, but terrified. They had been hooked up to monitors & surrounded by certified nurses. I was scared to death about being in charge of my own two babies. I stood over their bassinets almost the entire night making sure they were still breathing. What a nerve racking night!

The next day we were discharged & able to go home. Only 5 days in the NICU. What started out as a nightmare ended up being a blessing. We left with a great deal of knowledge & the upmost respect & appreciation for the nurses. 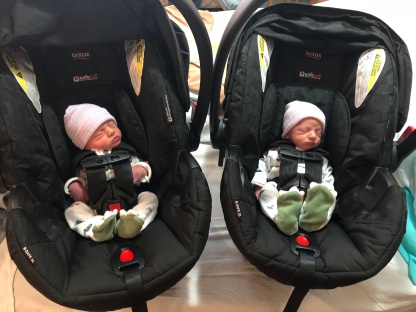 Since we have been home the boys have gained almost 2 lbs each. They are little chunks & are hungry all the time. Their cheeks get chubbier every day! They are healthy baby boys & we are over the moon in love! The experience we went through when they were born is just another chapter in our journey to parenthood. These boys are gifts from GOD & I am so blessed to be their mom. My life is forever changed.

Hello all! View all posts by Ashlee Locke